The Mysterious Forces of Civilization 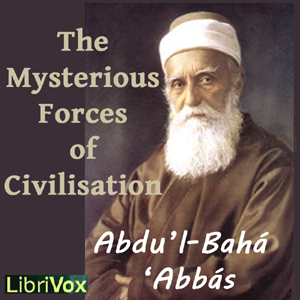 The Mysterious Forces of Civilization

LibriVox recording of The Mysterious Forces of Civilization (Persian: Risálih-i-Madaníyyih), read by Nicholas James Bridgewater. It was written before 1875 by ‘Abbás Effendí, known as ‘Abdu’l-Bahá (the Servant of Bahá) (1844-1921). The Persian text was first lithographed in Bombay in 1882 and printed in Cairo in 1911. ‘Abdu’l-Bahá was the eldest son and appointed successor of Bahá’u’lláh, the Founder of the Bahá’í Faith. The original text of this work was written and published anonymously, and the first English translation (by Johanna Dawud) was published in London in 1910 and Chicago in 1918, under the title ‘Mysterious Forces of Civilization’ written by "an Eminent Bahai Philosopher." This audiobook is based on the 1918 edition. Another translation was completed by Marzieh Gail and published in 1957, with an introduction by Horace Holley. The title was re-translated as “The Secret of Divine Civilization”. The book was widely known in its time as an attempt to improve the degraded condition of Persia (Iran). The author frequently references current issues that were being debated, such as whether to modernize and accept Western technology, or to reject Western culture and rely on technology developed in Persia and the Islamic world. (Summary adapted from Wikipedia)

Uploaded by librivoxbooks on October 10, 2010